Meet Chris McMillan. He's the manager of a rugby team that stood up to racism

Our club had been struggling for years so ten years ago we enabled some guys from Fiji to come and live, work and play rugby with us.

Our club had been struggling for years so ten years ago we enabled some guys from Fiji to come and live, work and play rugby with us.  They brought their families, some of them have married local girls, their kids go to our schools, they are our community members now.

We started playing rugby together and slowly got better.  So in 2012 we won the local Canterbury Country Wide competition for the first time ever – now we’re a pretty old club so that was a huge deal for us.  Not long after that we won a round robin game convincingly, fairly and squarely. But at the after match during the formal speeches the losing team’s representative was bitter and said he didn’t know they were playing Fiji in Suva today.  It was so insulting to our players and in front of everyone during the formalities too.  Once we started beating other teams that’s when the racist abuse began to get worse. And don’t get me wrong it’s not every club and it’s not every team or every player either, the supporters can be very bad at times as well.

The racist abuse – real disgusting stuff – began.  We lost to one team and as our players were walking off they were called F----ing Fijians … Black C---s by the supporters.  An official from the opposing team told me oh well you lost so I suppose you’ll go get another boatload of them won’t you Chris?  That’s when I realised bad losers are also bad winners. 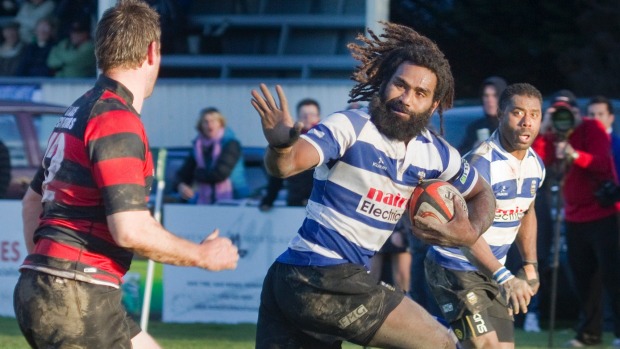 When we’ve called them out they’ve denied saying anything and accused us of making it up so we can get other players in trouble. The thing is a grown man does not cry, and his family does not cry for nothing. The abuse is real and its bullshit.

We get accused that some of our players are dirty but you know what? The guy they accuse of being dirty has been playing for us for ten years and he’s never had a red card.  He’s had five or six yellow cards in ten years, if that.  He’s hard working and he tackles as hard as he runs and that’s why they don’t like him. They don’t like losing the contest to him. They don’t think these guys are part of our community but they are, they really are.

When the cyclone hit Fiji we were out there fundraising for our guys families. We had two containers sent over full of chainsaws, blankets and supplies. We raised four or five grand in a one fundraising night and we sent over financial assistance and a family from here sent portable sawmills: this helped the local guys who trained up in milling and now they have the wood they need to build their own houses again.  This is the kind of thing a community does when its members are in trouble.  We look after each other.  That’s how Kiwis are aren’t we?

I feel really sorry for the guys, they just want to get on with their lives and bring their kids up in peace and dignity. They don’t want the attention. It’s been real hard on their families.  I feel responsible for everything as I brought them over here so in a way have subjected them to this.  No one wanted this to happen believe me. I walk around at some games and hear people whispering behind my back, so things have changed for everyone.  And sometimes I sit at home and think, God Chris, what the hell have you done? But I know we did the right thing. We’ve had a lot of messages of support from people we know and people we don’t, from rugby clubs as far away as Scotland, London, Thailand – all over the world.

Some people really hate me, some guys won’t shake my hand anymore, instead they swear in my face because they think I’m the troublemaker but these guys are in denial. Should I have just shut up and let them say and do whatever they wanted to our guys. I did what I did because what was happening was so unfair and wrong.

Someone told me once that the abuse is because of mitigating factors – seriously. Some people reckon a tackle is a mitigating factor for racism. Some guys say, Oh well I get called an f-----g idiot sometimes and I say: Well you can change your behaviour and stop being an idiot but he can’t change the colour of his skin.

A lot of people are scared to speak out but I hope that changes. I’m glad the Canterbury Rugby Union are showing leadership encouraging people to report incidents. Bring it all out into the open I say.  New Zealanders seriously need to start getting along with each other otherwise we are going to have bigger problems and we’ll all be worse off.

I don’t think rugby is a racist game or that rugby people are racists. Some New Zealanders think racism is OK and it’s up to the rest of us to tell them they are wrong.  The truth is racial abuse isn’t about rugby: it’s about people who think racist abuse is OK.

My biggest hope is that when our guys’ kids run out on a Saturday to play rugby: they won’t be subjected to the same racial abuse they’ve watched their Dads face.

An Open Letter to all New Zealanders

Every year around 400 people make formal complaints to us about racism they've faced, they come from all over the country and from a wide range of circumstances.

Growing up in Rotorua, becoming Race Relations Commissioner and everything in between.

The Race Relations Commissioner, Dame Susan Devoy, on why she does what she does.