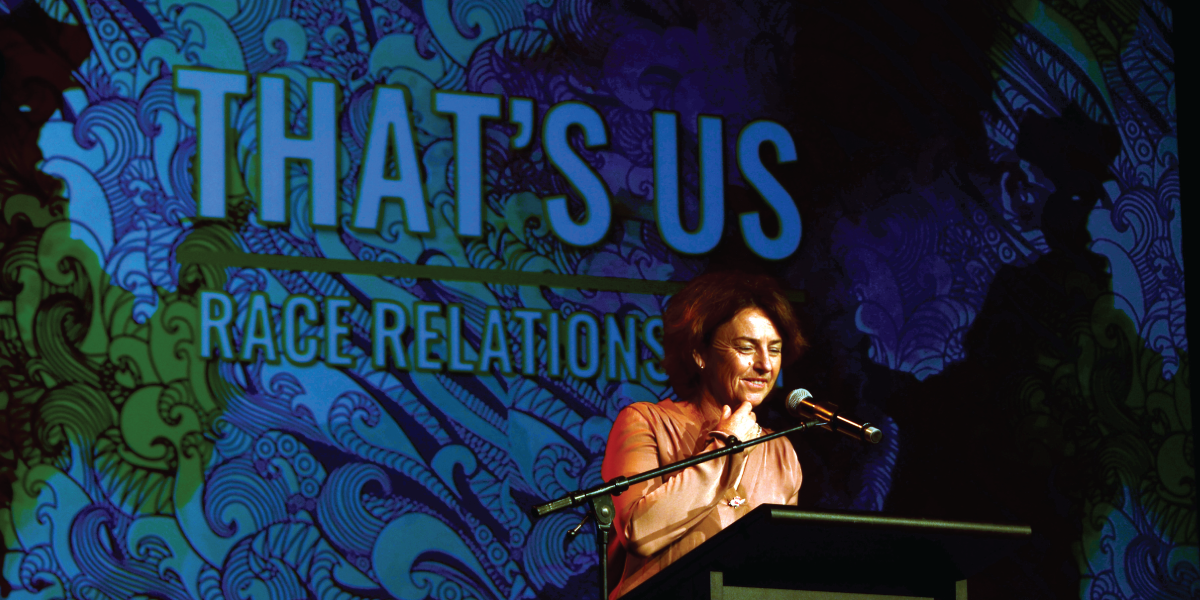 Last Sunday our Governor General, the Mayor of Wellington and many others gathered at Shed 6 on the waterfront to mark Race Relations Day with Multicultural New Zealand and the Wellington Multicultural Council.

It was a pretty awesome day of non-stop entertainment: from the kapa haka performers to tiny acrobatic dancers, the haunting bagpipe rendition of Amazing Grace, the stunning Vehaara dancers to performers leaping off the ground with nunchuks, to the stunning young violinists from Porirua East. The kai on offer was also unbeatable and went all day long.

It was a vivid reminder to Wellingtonians and New Zealanders that we live in one of the most ethnically diverse nations on the planet: as well as one of the most peaceful.

As I left Shed 6 afterwards, heading towards the Whare Waka, I paused at a very important memorial.

It marks the spot where 73 years ago in the middle of a world war, New Zealanders opened our hearts and our borders to 773 child refugees from a foreign country.

Many of these tiny Polish refugees were orphans.  New Zealanders took them in at a time when taking in refugees wasn’t always seen as a popular thing to do.

To be honest, when is it ever a popular thing to do? These children had survived the Third Reich, endured life in Russian work camps, they’d trekked from Siberia to Iran. We know that when they walked down the gang plank, emaciated and silent, many Kiwis cried. They hadn’t been prepared for the emotion and empathy they would feel for these little survivors. Someone handed one girl a lolly, and she wrote later on that it was the first lolly she had ever eaten.

Local Maori were there, as they were today, welcoming the children and letting them know that they had landed in Aotearoa.The children’s journey to become New Zealanders, to become Kiwis had begun.  And they never looked back. They were to become captains of industry, sports stars, politicians, mothers and fathers, grandparents.

Recently the son of one of those children went on our Facebook page to protest against the racism many refugees and migrants are currently facing. He wrote:

Hi. My father arrived in NZ carrying everything he owned, except a passport: he didn’t have one of those. Also he had almost no English. Eventually he married and raised four children. All of us kids went to university, we work and we raise our own children. Our story was different to many refugees and migrants in 2017 because we were white.

His words shows us that human empathy isn’t new to New Zealand, it’s something we need to hold on to and nurture. We need to care about other people.

We need to be prepared to stand up for other people even if it seems scary to do so.

For Race Relations Day 2017 we launched a video urging people to stand up for each other.

If we see racial abuse taking place in front of us we urge Kiwis to support the person being attacked.

To record the attack if possible.

And to report the incident to the authorities.

We are focused on encouraging Kiwis to answer two questions:

What do you stand for?

What do you stand against?

As we all know the world is at a cross roads when it comes to race relations: the way we treat each other will decide what path New Zealand goes down.

People from ethnic minorities report an increase in the number of personal racist attacks in recent times, this is in step with events taking place overseas.

What we do now really matters and that’s why we want people to be prepared to stand up for what they believe in: whether we let our country become a place where abusing someone because of their race is normal or not – that part’s up to us, all of us.

But it’s not all bad news.

This year we have seen an unprecedented number of race relations events take place across the country.

A lot of New Zealanders care deeply about race relations and it shows.

With race relations events planned from Oamaru to Gisborne, Wanganui to Invercargill, what’s great is that we are celebrating race relations in our provinces and smaller towns not just our big cities. While we have our tough times we do care about and respect each other and it shows.

Tauawhi Bonilla is this year's winner of the race unity speech competition. Here is his speech calling for Kiwis to stand up to racism.